Lampulo “Fishing Boat” on the house

The monument “fishing boat on the house” located in Lampulo village, KutaAlam sub-district, Banda Aceh. A 30-meter-long fishing boat remains stuck on the roof which almost two kilometers away from the coast. A total of 59 people survived in the wooden boat when the tsunami December 26, 2004 struck ferociously. Their names are displayed in the form of a plaque below the boat.  The family still lives in the house next to the boat, which cushioned it from the force of the water. When the tsunami struck their village on Sunday morning, the family and 22 of their neighbors climbed up to the second floor of their house. Amazingly, the drifting boat landed on the roof, and all 25 people climbed into the boat. Another 34 people soon followed, climbing up to the roofs of their houses and then into the vessel. Dozens of others who tried to run further inland were never seen again. the house now set as tsunami heritage

The grand mosque is Aceh’s inheritance from the Sultan Iskandar Muda era. It was built in 1612 (1022 Hijriah), although a mosque had stood on this location since the reign of Sultan Alaad-Din Mahmud Syah (1267-1309). Parts of it burned down during the rule of Sultan Putri Nurul Alam (1675 – 1678), and it suffered repeated damage from earthquakes, yet this iconic palace of worship survived. In 1873 it was burned again, this time by the Dutch. Two years later, the Dutch began to rehabilitate the mosque and it was completed in 1883. The architect was a captain in the Dutch army.

In 1935, the Departement of Public Works (BOW) spent over 35,000 guilder to expand the building. Initially, the mosque consisted of only one dome. During the renovation another dome was added. From 1959 to 1967, renovation work on the Grand Mosque added two domes and two towers.

At the end of 2004, the tsunami waves that struck Aceh submerged the mosque. While buildings nearby were heavily damaged, the Grand Mosque sustained only minor damages and was a refuge for the thousands who fled to safety.

The Aceh Tsunami Museum is a museum in memorial of the tsunami, which took approximately 240,000 victims in Nanggroe Aceh Darussalam on 26 December 2004.

The Aceh Tsunami Museum was built with the initiative of several organizations including the Rehabilitation and Reconstruction Agency (BRR) NAD-Nias, which provided funding, the Ministry of Energy and Mineral Resources (DESDM), which planned the budget, studied the content of the museum collection, and provided guidelines and management for the museum, the Government of Nanggroe Aceh Darussalam (NAD) as the provider and manager of the museum, the Municipality of Banda Aceh as a provider of facilities and infrastructure for the museum environment, and the Architects Association of Indonesia (IAI) NAD branch, which helped organize museum planning contests.

The destructive power of the tsunami waves that struck Aceh can only be grasped when one sees this vessel. Imagine, this ship was docked at the Ulee Lheue port when the tsunami lifted it off the shore and it landed in a crowded housing settlement at Gampong Punge Blang Cut. The wave carried this 2,500 ton, 1600 m2 vessel four kilometers inland.

This Diesel Power Generator Vessel (Pembangkit Listrik Tenaga Diesel – PLTD) was owned by PT PLN. When it was functioning, it could supply 38 megawatts, enough electricity to power a third of Banda Aceh. After it was carried inland, it became impossible to operate the stranded vessel as its generating power relies on a cooling system which can only function when the vessel is floating in water. The vessel was turned into a tsunami monument and was handed over the local government. The area for the monument is 3.5 hectares, with approximately 61 plots of land owned by 111 households.

From the top of the vessel, visitors can spot the BMW “edu park,” set up to provide interactive tsunami education to locals. The 4500 square meter park is equipped with tools that educate the people about tsunami and tell the sequence of a tsunami in a clear and understandable manner. This park clearly contributes to the effort of a community based early warning system.

Many areas in Aceh province are vulnerable to earthquakes and tsunami, because it is situated near the fault between two tectonic plates, the Eurasian and Indo Australian.

In the 2004 tsunami, many people fell victim because of the unavailability of escape buildings in areas most vulnerable to disaster. Therefore, in response to this problem, four good-quality escape buildings have been constructed in Meuraxa. Construction was coordinated by the Rehabilitation and Reconstruction Agency (BRR).

Escape buildings are to be used for evacuation by the Meuraxa community in case of future tsunami. The construction of these buildings was funded by the government of Japan through JICS, and cost reached IDR 8 billion per unit. These buildings are about 14 meters high from the ground and have helipads on the roofs.

The Tsunami and Disaster Mitigation Research Center  (TDMRC) is a center for data, information, research work, and consultation on all aspects of disaster to help increase disaster preparedness among the Acehnese people. This research facility aims to anticipate future tsunami along the Aceh coast and was established by the provincial government and run by Syiah Kuala University.

The research body, comprising 126 experts holding doctorates in their respective fields, is designed to meet international standards and to provide information on the process of Aceh rehabilitation and reconstruction.

In addition, the TDMRC facilities act as an escape building in case of tsunami and related disasters. There are five other escape building areas, located in Pidie, Lhokseumawe, Bireuen, Aceh Jaya and West Aceh.

Gampong Lamteungoh is a village (gampong) which was formerly part of the Indrapurwa kingdom in the past, where this kingdom was one of the three Hindu kingdoms which controlled Aceh before the entry of islam. The kingdom of IndraPurwa allegedly existed 2,000 years BC. In the course of its history, the kingdom was once hit by tsunami in the past 200 years, this can be seen from the remnants of its history, namely mosques of indrapurwa and some traces of the tsunami in the past can also be seen in the surrounding islands such as Tuan Dipulo island, Bunta island and other several neighboring islands. In 2004, this village was again hit by tsunami that destroyed entire settlements community and underwater ecosystem that became a tourist attraction.

After earthquake and tsunami in late 2004, community capacity building programs and restoration of underwater ecosystem-based society have been carried out, both by the government and local NGOs, national and international. Currently Lamteungoh village has become one of the marine tourist village which has a beautiful underwater enchantment such as coral reefs and fascinating ornamental fish. Besides traditional activities such as fishing trawlers drag the ground is still preserved as a form of community economic activity. 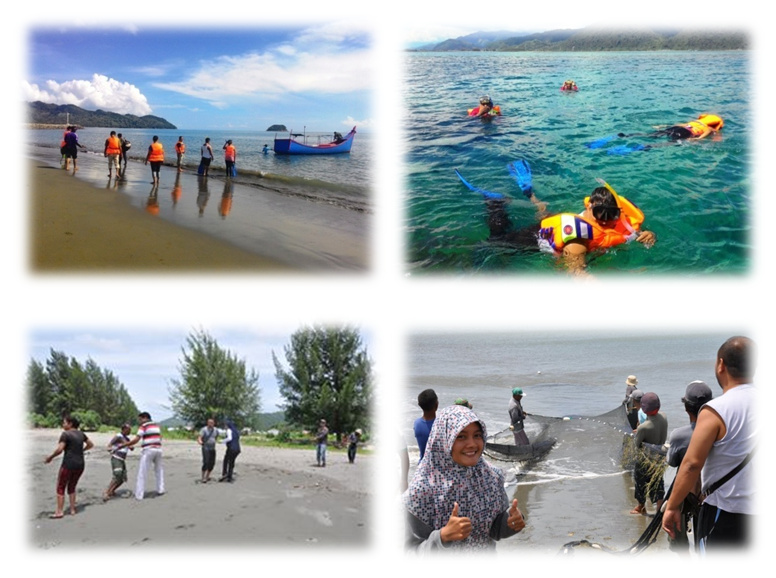